Twenty one kilometres of driving heaven. Since its construction (1925 – 1927), the Nordschleife has enjoyed a reputation as a terrifying and merciless route through the Eifel forests. An English journalist who visited the Nordschleife during the opening race on 18 June 1927 even concluded “that it seemed as if a reeling, drunken giant had been sent out to determine the route”. The Formula 1 driver Sir Jackie Stewart, a three-time world champion in 1969, 1971 and 1973, was so impressed by the circuit that he gave it the name which it will probably never lose: Green Hell (Grüne Hölle).

Racing and winning on the Nordschleife has always been very special for racing drivers, because the track is one of the most demanding in the world. Tricky corners, treacherous crests, steep inclines and gradients and constantly changing road surfaces demand great skill from the driver and put vehicles to a hard test.

The best-known event today is the ADAC TOTAL 24-hour race, which is held on both the Nordschleife and the Grand Prix circuit and which for four days transforms the entire circuit into a huge spectacle. Up to 800 amateurs and professionals in up to 200 cars take part in this race.

Since its opening the 20.8 km (12.9 mi) track has been used by the public for the so-called Touristenfahrten, i.e. anyone with a road-legal car or motorcycle, as well as tour buses, motor homes, or cars with trailers. It is opened every day of the week, except when races take place. The track may be closed for weeks during the winter months, depending on weather conditions and maintenance work. Passing on the right is prohibited, and some sections have speed limits; the normal traffic rules (StVO in German) also apply here. 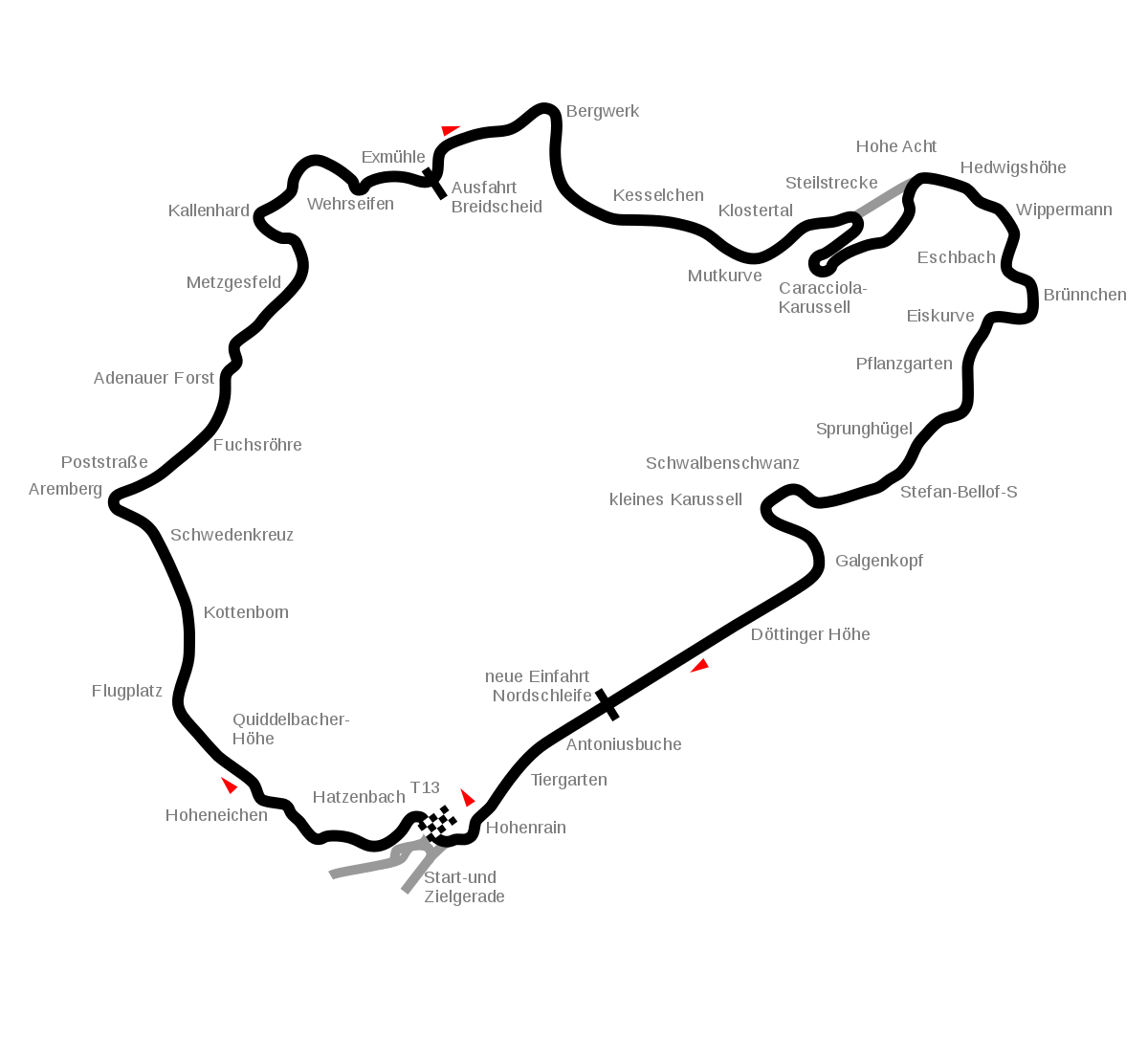 It’s the best news we’ve had for a long time. The Nurburgring Nordschleife opened again on Thursday 30th April for public ‘touristenfahrten’ days.

There’s a few new rules to go with it to keep everybody safe:
1. Tickets must be purchased in advance online and use the app to scan onto the circuit. Take a look at the video opposite for more information.
2. Maximum of two people per vehicle. The same two people!
3. Public areas around the Nordschleife remain closed.
4. Please stay safe and in the car.
5. Wear a mask when refuelling.
6. Hotels & restaurants need a reservation in advance.
7. No groups allowed at parking locations.
8. Wear a mask in any public building.

Nearby you’ll find the ED gas station on the Döttinger Höhe, not even 2 kilometers from the tourist access of the Nordschleife. Leave the parking lot at the first exit of the roundabout, then follow the road until the end and turn right twice. The ED is on the left side. Unfortunately there aren’t any gas stations directly on the racetrack so you should bring enough jerrycans, if your car is not licensed for use on public roads.

The parking lot directly at the track is relatively small and therefore only for participants. It is asked to park caravans, trailers and visitors’ vehicles at the opposite gravel parking lot, which you’ll reach via the roundabout. There you will also have enough space to load your vehicles. Please note that the roundabout is a public road, which prohibits driving a car without registration.

Inside the restaurant Devil’s Diner there are public and barrier-free toilets.

The closest ATM is located underneath the grandstand, in the Nurburgring Info Center.
Address: An der Bundesstrasse 1, 53520 Nürburg.